Photographs from the Karoo

The art on the rocks gives testimony to the past occupation of this arid land by the Khoi and San people. The word “Karoo” is said to come from a Khoi word, Karusa, which means “Thirst land” or “Place of Great Dryness” but I have been unable to find any authoritative references to confirm this.

For many years our experience of this arid region, which takes up about 35% of South Africa’s land area, was confined to what we could see from the N1 National Road when travelling from Cape Town to the northern parts of South Africa and to Zimbabwe. This dry, dusty and desolate strip of land straddling the highway between Laingsburg and Colesburg, with its low scrubby vegetation, blazing hot summers and bitterly cold winters, seemed to provide little reason to linger. And then, in September last year, we decided to spend a long weekend at the Karoo National Park near the town of Beaufort West, roughly in the centre of the Karoo. 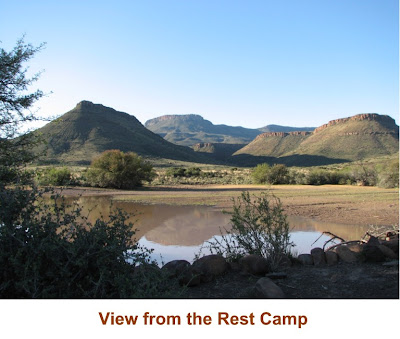 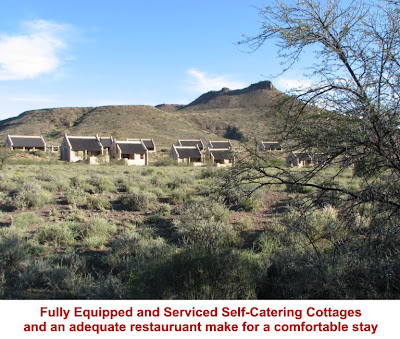 The Karoo National Park is 75 000 ha in extent. It is home to two of South Africa’s most endangered species, the riverine rabbit and the black rhinoceros. There are also a wide variety of buck, mountain zebra, wild ostrich and five tortoise species. A unique experiment has recreated the quagga from portions of its genetic code using tissue samples taken from a museum exhibit. This species became extinct when the last mare died in Amsterdam Zoo in 1883. Now, it once again roams free in the Karoo national Park. Bird life is abundant. Martial, booted and black eagles soar over the cliffs and the call of the shy Cape Eagle owl punctuates the evenings.

Our visit took place in spring after unusually good rains. The countryside was at its most spectacular. Its vastness and brooding beauty took our breath away and offered endless subject matter for our photography. The silence is overwhelming. Perhaps the best description of this part of the Karoo is one I read in some tourist publicity material. It went something like this:

“When travellers of the world decide to explore the Western Cape a discerning few find themselves in the Great Karoo, where nature dazzles on the endless plains and among the mountains. Here, in blazing summers and icy winters, the silence is so pure you can hear God think, the stars so near you feel you have only to reach out to touch them.”

For once, I believe the copywriter’s apparent hyperbole understates reality! 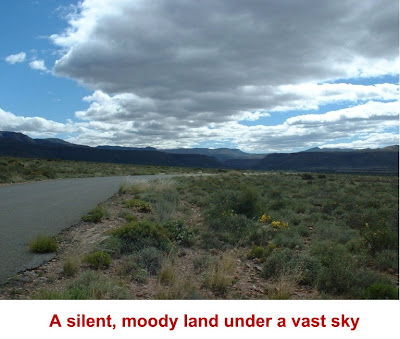 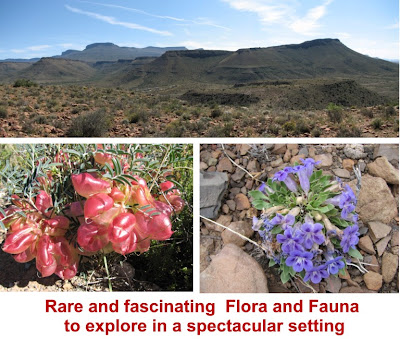 The Great Karoo has been a vast inland basin for most of the past 250 million years. At various times, there were great inland lakes and swamps and volcanic activity took place on a titanic scale. Ancient reptiles and amphibians thrived and their fossil remains have made the Karoo famous amongst palaeontologists.

The fossil trail at the National Park gives a fascinating insight into these ancient occupants.

Anonymous said…
Hi there
Your site is getting bigger and better, love the photo's.

love you all tons